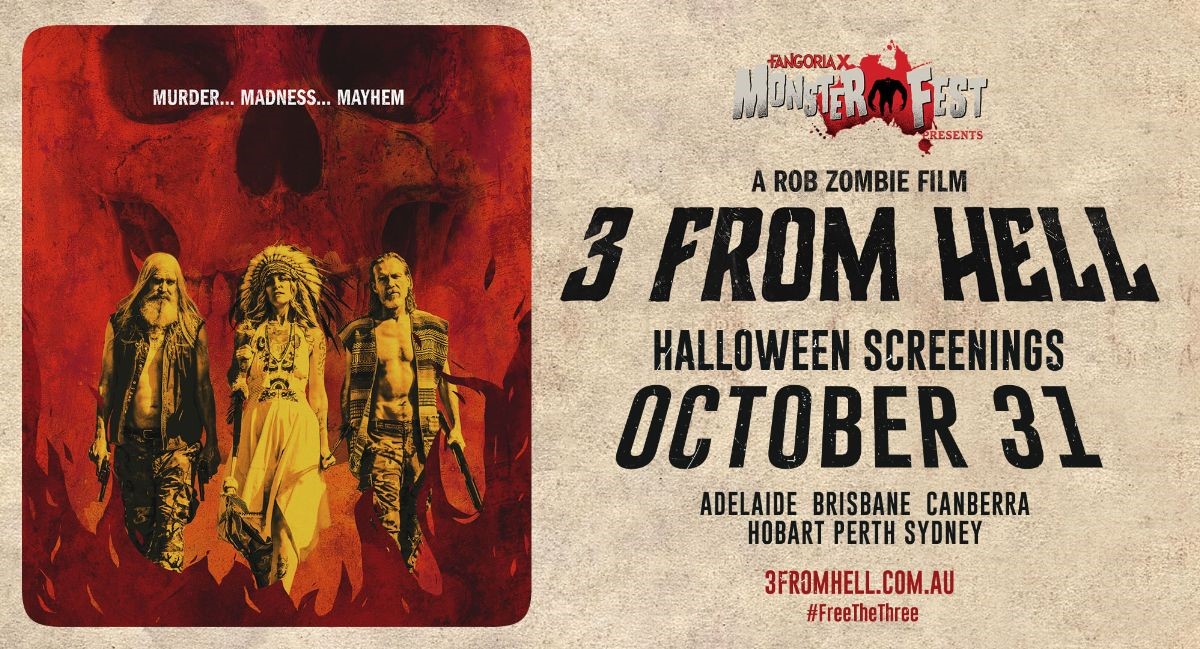 FANGORIA x MONSTER FEST is pleased to announce that on October 31st they will bring Rob Zombie’s 3 FROM HELL to cinemas for a series of Halloween Screenings across Australia.

Due to public demand following the announcement of the Australian Premiere of 3 FROM HELL in Melbourne, the decision was made to take the film wider to satisfy the desires of Australian genre fans.

First, there was HOUSE OF 1000 CORPSES. Then there was THE DEVIL’S REJECTS. Now, from writer/director, Rob Zombie comes the next blood-soaked chapter in the most violent crime saga in movie history – 3 FROM HELL.

After barely surviving a furious shootout with the police, Baby Firefly (Sheri Moon Zombie), Otis Driftwood (Bill Moseley), and Captain Spaulding (Sid Haig) are behind bars. But pure evil cannot be contained, and a firestorm of murder, madness, and mayhem will be released in this terror ride to hell…and back.

3 FROM HELL will have its Australian Premiere as the Opening Night Film at FANGORIA x MONSTER FEST 2019: MONSTER TAKES MELBOURNE at Cinema Nova on Thursday October 10th.

Adelaide, Brisbane, Canberra, Perth & Sydney will also join Melbourne with 3 FROM HELL being the Opening Night Film of MONSTER FEST 2019: MONSTER TAKES AUSTRALIA on October 31st with their screenings occurring two hours ahead of the Australia-wide sessions of the film.