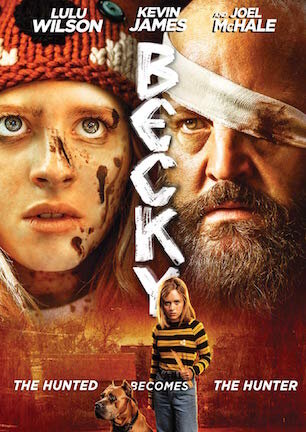 “A stylish and very gory home-invasion thriller” The Hollywood Reporter

BECKY is a no-nonsense thriller smartly directed by Jonathan Milott and Cary Murnion (the duo behind cult horror comedy Cooties) and featuring a fantastic lead performance from Lulu Wilson (The Haunting of Hill House, Sharp Objects) and comedy A-listers Joel McHale (Community) and Kevin James (Paul Blart, Grown Ups) like you’ve never seen them before. With sterling support from Amanda Brugel(The Handmaid’s Tale), BECKY is a trip you don’t want to miss.

Rebellious teenager Becky and her father head for a weekend getaway at a lake house in an effort to reconnect. The trip takes a turn for the worse when her father’s new girlfriend and her son show up as well. But that’s the least of Becky’s problems: before long, a group of escaped convicts, led by the murderous Dominick, take the family hostage. But they haven’t reckoned on the rage and resourcefulness of Becky.