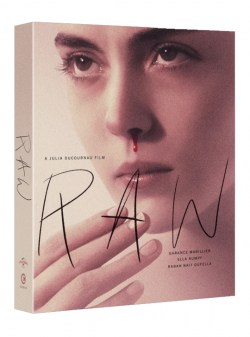 ‘Shocking but not sensationalist, this is a strong cannibal movie worth chewing over’

‘A clever feminist parable – and a contender for best horror movie of the decade. A near-perfect movie… You never get the sense that you’re not watching a master at work, regardless of how scant Ducournau’s filmography is. She is the real thing’

‘Raw turns out to be very well done as Ducournau serves up a tasty blend of gore, metaphor and mischief’

Get ready to tuck into a meaty treat with Raw, the deliciously dark tale of a strict vegetarian who discovers a taste for human flesh after heading to a brutal veterinary college where initiation ceremonies are the norm. Second Sight has cooked up a special Limited Edition Blu-ray of this horror hit due to be dished up on 19 April 2021.

Julia Ducournau’s shocking feature film debut was acclaimed by critics after a barnstorming debut at Toronto International Film Festival, where paramedics had to be called after audience members fainted at the film’s premiere. Now, after wowing audiences on its initial release, Second Sight has pulled the Raw ingredients together for a lip-smacking Limited Edition release packed full of extras and served up in a sumptuous rigid slipcase with a booklet containing essays and interviews and three collector’s art cards.