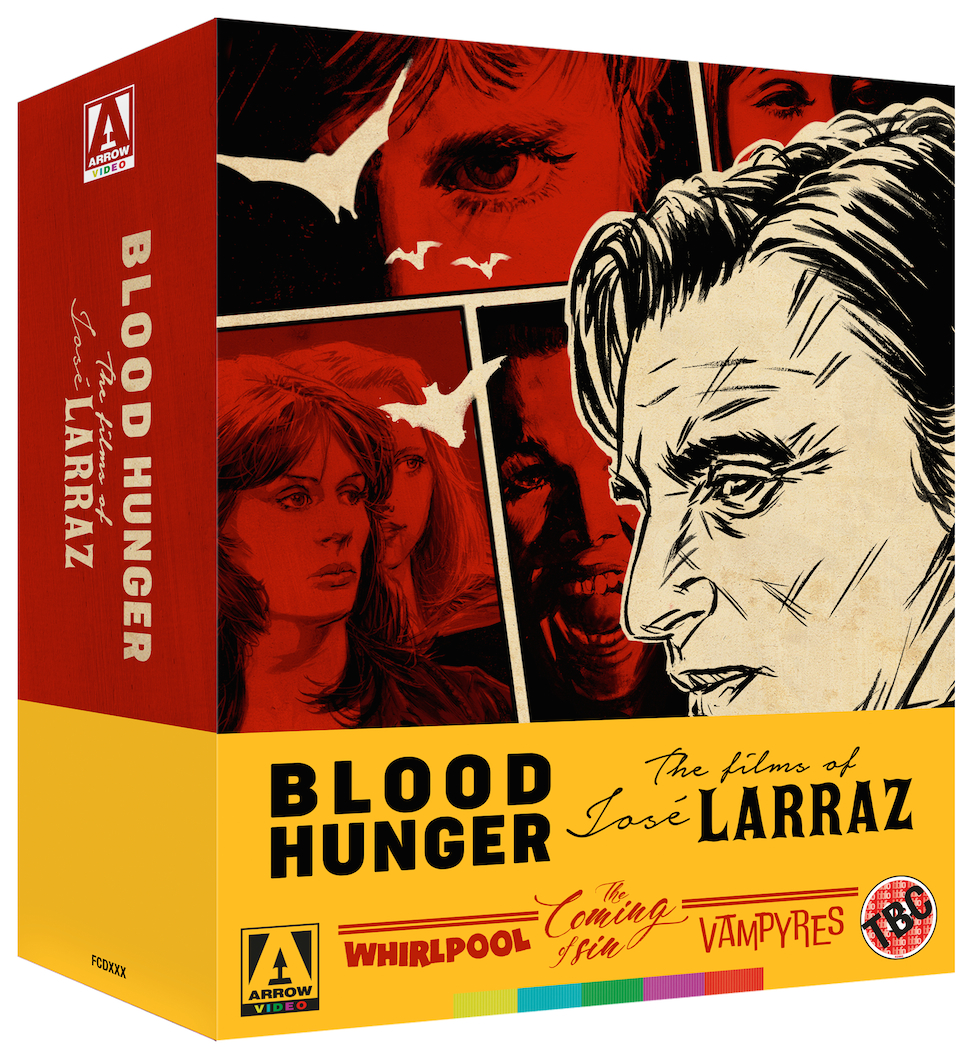 One of the most underrated and oft-neglected genre filmmakers of his generation, Spanish-born director José Ramón Larraz (Symptoms) finally receives his due with this collection of his work, the first of its kind, bringing together a fascinating cross-section of films from the first half of his lengthy cinematic career.

In Larraz’s debut feature, the hitherto ultra-rare Whirlpool (1970), Vivian Neves stars as Tulia, a young model invited to a photographer’s secluded country home for what purports to be a quiet weekend retreat – but soon transpires to be anything but. 1974’s Vampyres – perhaps the best known and most widely-released of all José Larraz’s films – sees a duo of blood hungry female vampires prowling the British countryside, from where they lure unsuspecting male motorists back to their imposing, dilapidated mansion for draining… in more ways than one. Meanwhile, in 1978’s The Coming of Sin (La Visita del Vicio, in its native Spanish), a young gypsy girl experiences a violent sexual awakening as her dreams of a naked young man on horseback become reality.

By turns terrifying, titillating, artful and scandalous, these three films collected here – all newly restored from original film elements, with Whirlpool and The Coming of Sin making their Blu-ray world premieres – collectively offer film fans a unique perspective on the fascinating, highly-varied career of one of the horror genre’s most overlooked auteurs.

VAMPYRES CONTENTS
Original US Theatrical Cut
Brand new audio commentary by Tim Lucas
Obsessive Recurrence: The Early Films of José Larraz – author and critic Kim Newman reflects on the recurring themes and underlying obsessions linking together the early productions of José Larraz
A Curious Casting – actor Larry Dann on the strange story behind his casting in Whirlpool
Deviations of Whirlpool – featurette comparing the differences between the US Theatrical Cut and a previously circulated, alternate cut of the film
Extract from an archival interview with José Larraz
Image Gallery
Original US Theatrical Trailer

THE COMING OF SIN CONTENTS
Spanish and English language versions of the feature
Brand new audio commentary by Kat Ellinger and Samm Deighan
Variations of Vice: The Alternate Versions of The Coming of Sin – exploitation expert Marc Morris on the strange and scandalous release history of José Larraz’s most censored film
Remembering Larraz – author and filmmaker Simon Birrell shares his fond and extensive memories of his long-time friend and collaborator José Larraz
His Last Request (2005, 27 mins) – short film by Simon Birrell made under the guidance of José Larraz and starring Spanish horror legend Jack Taylor
Extract from an archival interview with José Larraz
Image Gallery
Original Spanish Trailer