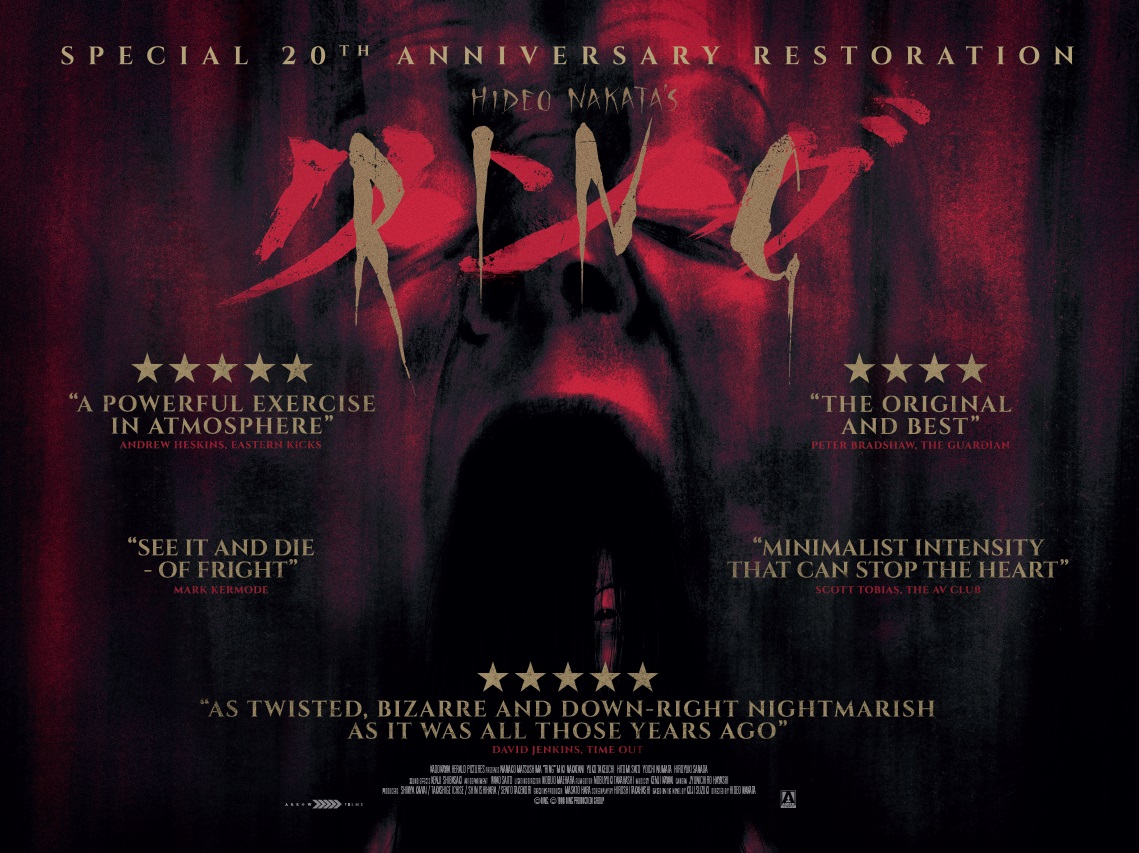 Celebrate the 20th anniversary of the icon that taught western audiences to fear J-Horror with the newly restored cinematic return of Hideo Nakata’s classic Ring.  Then, experience the terrifying Sadako through your own screen with the feature-packed first ever UK  Blu-ray release!

A group of teenage friends are found dead, their bodies grotesquely contorted, their faces twisted in terror. Reiko (Nanako Matsushima, When Marnie Was There), a journalist and the aunt of one of the victims, sets out to investigate the shocking phenomenon, and in the process uncovers a creepy urban legend about a supposedly cursed videotape, the contents of which causes anyone who views it to die within a week – unless they can persuade someone else to watch it, and, in so doing, pass on the curse….

Before the sequels, remakes and crossovers, audiences were first introduced to a future horror icon amidst an era of ultra-violent slashers from the ‘80s and ‘90s, where its more sombre march towards terror taught audiences and filmmakers alike that the dread of the unknown can be more frightening than the horrors we know.

Ring, initially released to worldwide acclaim, sparking a global genre renaissance and a western love-affair with “J-Horror” that endures to this day. Now, the twisted visage of Sadako is one of horror’s most recognisable icons, alongside the likes of Freddy Krueger and Jason Voorhees. The hushed gossiping of the tape’s ghastly legend resonated with those who spent their playground years sharing stories of Bloody Mary and Candy Man, offering us an insight into Japan’s yūrei-driven folklore, and a new story to share!

There’s no better way to relive this influential horror, or experience it for the first time, with this big screen celebration! Persuading someone else to watch is the only way to escape Sadako’s curse, so why not enjoy a horror-filled night out in good company?

Over the years, there have been many reimaginations and imitators, but none can compare to Hideo Nakata’s original, slow-burning nightmare. With a brand new restoration and a wealth of bonus content, the film’s debut on UK Blu-ray is more than worth the wait, making it a staple for any horror fan’s collection!

-“Ring Legacy” – interviews from critics and filmmakers on their memories and the enduring legacy of “Ring”.

-“A Vicious Circle” –  video interview with author and critic Kat Ellinger on the career of Hideo Nakata.

-“Circumnavigating Ring” – video essay by author and critic Alexandra Heller-Nicholas on the evolution of the film series.

-“Ring Legacy” – interviews from critics and filmmakers on their memories and the enduring legacy of the Ring series.

-“A Vicious Circle” –  video interview with author and critic Kat Ellinger on the career of Hideo Nakata.